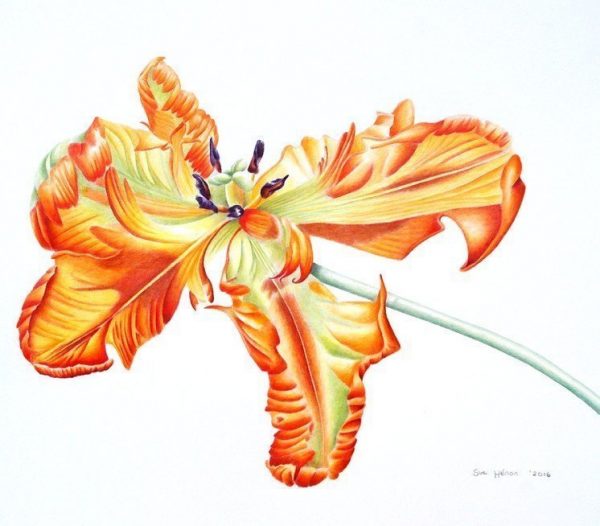 Born Hayes, Middlesex, England, 1961. During the 1980s, Sue worked for EMAP Newspapers, designing advertisements for their various publications. In 1986, she was prizewinner of an EMAP advertisement design award. From 1987 to 1996 Sue attended various Painting seminars in England and then went on to study with the Open College of Arts from 1996 to 2001.

Sue has been a member of the Society of Botanical Artists since 2004. She is also a member of the Kunst Archiv in Darmstadt Germany, a member of the Gesellschaft zur Förderung der Gartenkultur e.V Zwieg Rhein-Main and  a committee  member of the Freunde und Förderer Museum Schloss Fechenbach in Dieburg Germany.

Sue has worked as a freelance artist, in Dieburg, Germany, for the last 18 years. She has her own Atelier where she teaches a weekly botanical art course and offers Weekend workshops and demonstrations. She also works together with the local towns, museums and educational addresses in other areas throughout Germany.  Primarily, she works with coloured pencil, but she also uses watercolour and oil for larger pieces. Several of her illustrations have been included in publications for museums and magazines in the UK, Germany and Spain. She has had regular press coverage in Germany, including two television appearances.

Sue exhibits with the SBA both in Germany and England.  She has also had many solo exhibitions including “Say It with Flowers” Schloss Fechenbach, Germany, “The Oriental Touch”, Schloss Fasanerie, Fulda, Germany,” Mariannes Garden” Palmengarten Frankfurt, Germany and Prince Georgs Garten, Darmstadt, Germany, “Simply Flowers” Gross Gerau Germany.  She has also exhibited in Santiago de Compostela in Spain.  Her works are to be found in collections public and private in Europe and further a field.

Additionally,  in 2013 she was selected as  a Jury Member for the prestigious Licternberg Art Prize in Hessen, Germany.

She has been featured in the German book featuring flower artists “Eine Blumenmalerin sollt´ich sein!
( out 2016).

Currently, her focus is on several projects with Tulips, to be seen in exhibtions during 2017.

Why has Sue chosen to paint flowers? “It’s simple, I love flowers that’s all”