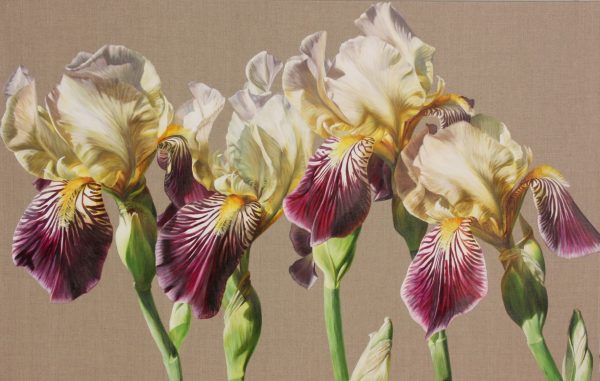 UK based artist who focusses on floral/botanical forms in acrylic on canvas or linen expressing the effect of sunlight & shade on the colours and forms of flowers. The work is usually large, showing ‘up-scale’ representations making an impact in large spaces.  Boldness is tempered with sensitivity and romance.

Sarah has run an open studio and gallery in Great Walsingham North Norfolk since 2007 and has work in private & corporate collections around the world.

Selected images have been published as prints on canvas and paper by companies such as Rosenstiel’s, The Art Group, Pyramid International and Artko.  Further images are reproduced as a growing range of products currently including greeting cards, prints, calendars, melamine and glass tableware and limited edition silk scarves.  All are available through Sarah’s website.

Sarah has a formal art education to BA(hons) level.

Silversmithing was chosen as the main degree subject in preference to Fine Art as a method of exploring 3D imagery in a new medium (non-ferrous metals & resistant materials).

During the degree placements were undertaken in other areas; working for a textile designer (to restore the feeling for colour removed by two years of study of metal!)and a major British milliner.

After college there was a period of travel and work took place including one year each in Australia & New Zealand.  Whilst in Australia, Sarah set up a business designing and making fashion, hats and jewellery which she sold via the renowned Greville Street Designer’s Market in Melboune.

On return to the UK and via a circuitous route, Sarah worked in the UK retail finance industry; originally in the arena of share registration for one of the largest UK share registers (Abbey National/Santander).  She then decided to retrain and undertook a post graduate qualification to became a Chartered Company Secretary (ACIS) with special expertise in Corporate Governance (world prize 2001).  She became the Company Secretary for GE Consumer Finance and associated businesses.

Any cookies that may not be particularly necessary for the website to function and is used specifically to collect user personal data via analytics, ads, other embedded contents are termed as non-necessary cookies. It is mandatory to procure user consent prior to running these cookies on your website.