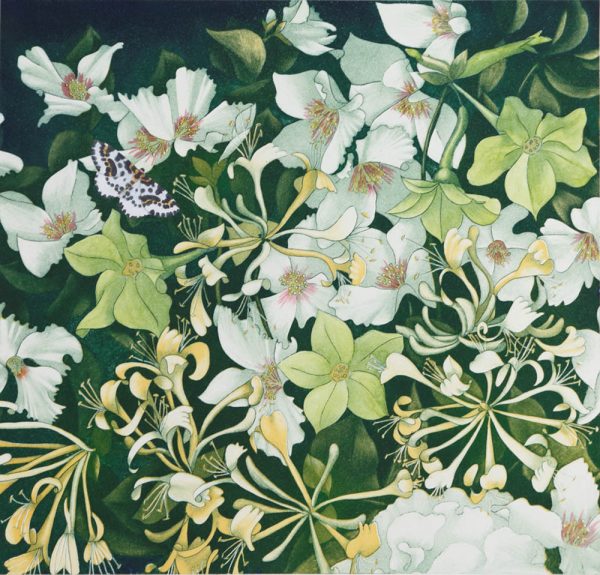 Libby started painting from an early age and her interest in flowers and natural history began as a child on walks in Pembrokeshire.
Libby has a degree in Fashion and Textiles from Ravensbourne College of Art and Design and worked in textile design for several years including Courtaulds as a designer and colourist.

Her love of colour, design and the natural world was further enhanced by living and working in Kuwait and Barbados. While Libby was in the Caribbean she began to paint the local flora and sold her paintings through a gallery in Bridgetown.

Returning to England Libby continued depicting flowers in watercolour, intaglio, oils and coloured pencil. She became a member of the SBA in 2001 and is an early member of the Greenwich Printmakers.

Her work has sold all over the world and has been shown in the Royal Academy Summer exhibition, the Royal West of England Academy and the Royal Society of Painter Printmakers.

Awards from the SBA include the Founder Presidents Commendation, The St. Cuthberts Mill Award and the Presidents Award 2019.

Libby lives and works in Kent.