A Feast of Clementines 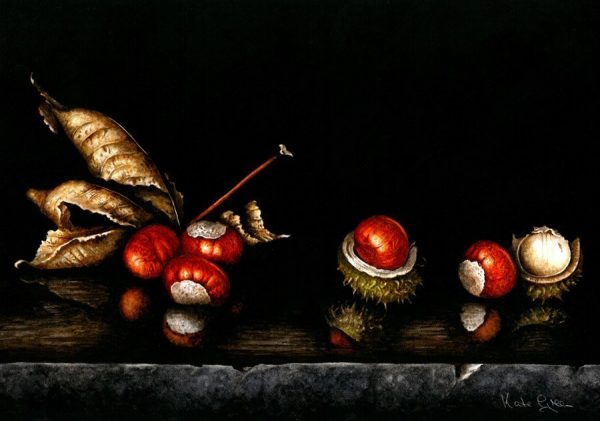 Kate had a relatively late start as an artist.Always creative, once children had flown the nest she returned to studying & achieved a First Class Honours Degree in Art History & Philosophy of the Arts.The wealth & diversity of art she encountered inspired her to embark upon her own journey!

Kate’s main inspiration is her mature garden, rich with flora & fauna.A quiet stroll always reveals some treasure to paint.It is love of intricate detail which drew her to botanical art &ultimately to the magical jewel-like world of miniature painting.

She was elected a Member of The Society of Botanical Artists in 2014 & exhibits with them annually in Central Hall, Westminster.

Also elected a Member of The Royal Society of Miniature Painters, Sculptors & Gravers in 2015, she exhibits with them annually in the Mall Galleries, London.

As a Member of The Hilliard Society of Miniaturists based in Wells, Somerset, she won the coveted Suzanne Lucas Award at their 25th Anniversary Exhibition.

In addition to selling her work at these international exhibitions, she has had many successful solo shows & work hangs in local galleries. Kate’s work is collected locally & worldwide .She recently exhibited & sold in Palmengarten, Frankfurt, with the SBA.