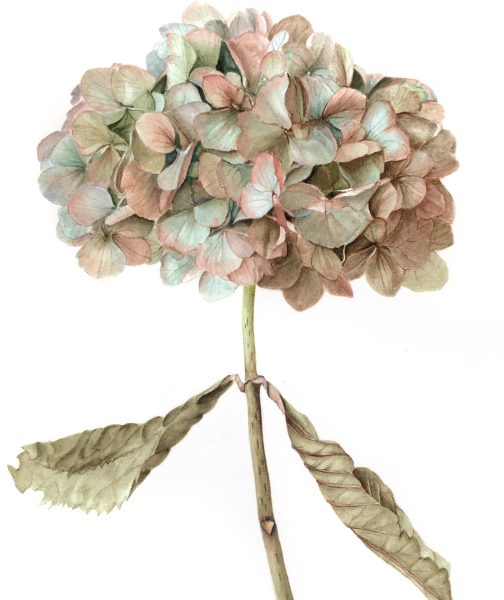 My interest in art began at a very early age and so it was a no surprise when I embarked on a three year course in Dress Design after leaving school. I joined a small private dress company as its designer and was responsible for designing a range of dresses for Spring, Summer, Autumn and Winter.
After having my family I found time to enjoy art again at local classes,working mostly on still life which was never really satisfying.
Then I discovered botanical painting and realised at once I had found my niche.  I found the discipline and accuracy so rewarding. Among the many projects I have completed I find the various colours and tones of Autumnal Hydrangeas particularly fascinating.

Over the years I entered the RHS Exhibitions. The first was an art class project where we were awarded a silver gilt medal. This encouraged me to try on my own.
Whilst on holiday in South Africa I became interested in Proteas and decided they would be a good subject to enter into an exhibition which I did and was rewarded with a Gold Medal. I followed this with a project on Dahlias and  was awarded a Silver Medal.